The Great Highland bagpipe (Scottish Gaelic: a' phìob mhòr) is a type of bagpipe native to Scotland.  It has acquired widespread recognition through its usage in the British military and in pipe bands throughout the world.

The bagpipe is first attested in Scotland around 1400 AD, having previously appeared in European artwork in Spain in the 13th century.  The earliest references to bagpipes in Scotland are in a military context, and it is in that context that the Great Highland bagpipe became established in the British military and achieved the widespread prominence it enjoys today. 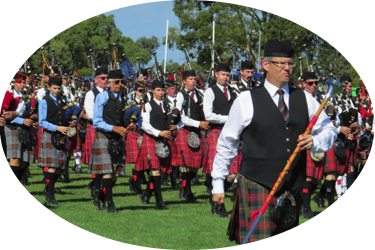 The Great Highland Bagpipes and their repertoire continue to evolve, and research into all aspects of traditional music and styles persists.  Many other cultures across the globe have abandoned the more traditional aspects of their arts and music; on the other hand, the Scots and the other Celtic peoples continue to celebrate ancient and traditional instruments, keeping them an integral part of their musical heritage.

There are many highland pipe bands in every state of Australia. 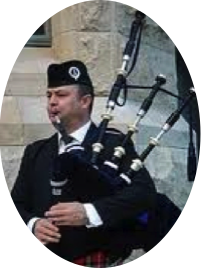