The Scottish Associations of South Australia

Few aspects of Scotland’s fascinating history were as colourful, or as bloody, as the clan system.  From ancient origins in the Celtic, Norse or Norman-French traditions, by the 13th century, the clans had grown firm roots in the Highlands of Scotland. 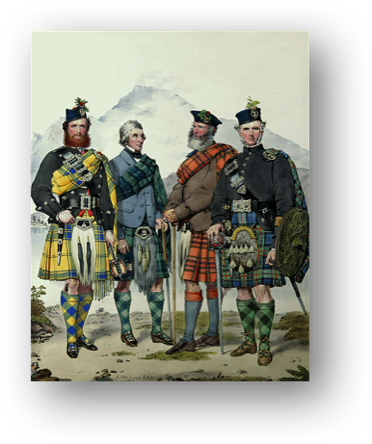 While the term ‘clan’ means family or children in Gaelic, not everyone in the same clan was actually related to each other. The clans lived off the land, with cattle being their main source of wealth and, along with border disputes, the prime cause of inter-clan unrest.  The most important clan chiefs at this time were part-kings, part-protectorates and part-judges and they held real power over their controlled lands.

The system remained largely intact until the time of the bloody Battle of Culloden in 1746, where the Jacobite rebellion was mercilessly crushed by the royal troops of King George II.

Today, many clans can be traced back to a specific part of Scotland, for example the MacLeods of Skye, the MacNeils of Barra or the MacNabs of St Fillan on Loch Earn.  If you have ancestral ties and a clan history in Scotland, a trip to your clan’s homeland is an incomparable and moving experience like no other.  There are clan societies in a number of countries where the Scottish ancestors of current day’s families migrated in early years.

"Modernly, in most English speaking cultures, a woman usually changes her surname to that of her husband when she marries.  It is only a very recent development for modern women to either keep their own surnames or else combine their surnames with that of their husbands, and these practices are still not the norm.  However, in Scotland the practice of a married woman using her husband's surname only began among certain classes in the 17th century, and only became the general norm in the late 19th or early 20th century.  Even today, in Scottish law, a married woman is identified primarily by her original name, with any married name treated as an alias.  So, for example, modernly if Elspeth Buchan marries Alexander Elphinstone and thereafter normally uses his surname, in the eyes of the Scottish law courts she is "Elspeth Buchan or Elphinstone".

In the middle ages, since most people did not have fixed, inherited family surnames anyway, there was no question of a woman changing her personal byname (which described her) to that of her husband (which, after all, described not her but him).  Even among those times, cultures, and classes which did use fixed, inherited family surnames in Scotland, women did not normally change their surnames to that of their husbands on marriage.

As a consequence, in contrast to the modern English speaking world where we are used to thinking of a family as a group sharing the same surname, in medieval Scotland a family all using the same byname would have been an unusual coincidence.  There were many families where each individual family member had a different byname.

Over time we have seen the descendants of the clans settle in many countries of the world and the clan family has continued to grow.  Australians who are 4th, 5th or 6th generation descendants of Scottish families still maintain their pride in their clan ancestry.

Historically, a clan was made up of everyone who lived on the chief’s territory, or on territory of those who owed allegiance to the said chief. Through time, with the constant changes of “clan boundaries”, migration or regime changes, clans would be made up of large numbers of members who were unrelated and who bore different surnames.  Often, those living on a chief’s lands would, over time, adopt the clan surname.

A clan also included a large group of loosely related septs – dependent families – all of whom looked to the clan chief as their head and their protector.

The  combination of pride of race and soil forms the most powerful relationship of people to their land and chief.

Over time we have seen the descendants of the clans settle in many countries of the world and the clan family has continued to grow.  Australians who are 4th, 5th or 6th generation descendants of Scottish families still maintain their pride in their clan ancestry.

Published in 1870  and owned by the Royal family